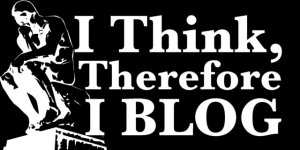 This is my 50th post on WordPress. I started about a year ago, so that’s roughly one post per week on average.

First, a confession. My main motivation for starting my blog was that (1) everyone was telling me I should and (2) to help sell my books. I don’t think either were the best reasons by themselves, and I still haven’t sold many books. But here I am, and I like to think I’ve emerged from my first year a little bit wiser and not just older.

So here, in no particular order, are ten lessons I’ve learnt about blogging over the last twelve months or so. Some of these thoughts are quite personal to me and I don’t expect everyone to have drawn exactly the same conclusions, but this is how it seems to me anyway.

The first lesson: It’s all about the people

I’ve seen the light. I admit I didn’t arrive on WordPress necessarily eager to engage with lots of other people. But I have, and I’m much the better for it. You, my fellow bloggers, have taught, encouraged and inspired me, made me laugh, and sometimes all of the above at the same time. Some of you have also made humbled me with your blistering honesty about some of the problems and challenges in your lives. I wish I was that brave.

The second lesson: Be yourself

Everyone is different, and so is every blog. Although it’s good to learn from others, the things I have to say, to contribute, will never be quite like anyone else’s. That doesn’t make them any less valuable, or any more come to that. If I wasn’t here, there’d be a Christopher Peter shaped hole that no-one else could entirely fill. Exactly the same thing applies to each one of you (apart from the Christopher Peter bit obviously).

The third lesson: Give something back

Just as with all writing, quality should be non-negotiable. I’ve received so much from other bloggers, and in return I’d like to at least show them the courtesy of writing posts that have some value, or are thoughtful, or hopefully interesting, or sometimes funny – and always spell-checked. (You realise it’s now inevitable this very paragraph will have a toe-curlingly bad typo in it that I’ve seen right through. You just know it.) Yes, a few of my posts will be about promoting my books, directly or indirectly. But then, I hope those books will bring some enjoyment to those who read them too.

The fourth lesson: Find your focus

Of course, to be yourself you first have to work out who the heck you are. Which isn’t always easy. More to the point, what’s my blog for? I decided pretty early on that it wouldn’t try to be about everything I am. Some people put their whole lives into their blogs, writing about anything and everything, and there’s nothing wrong with that of course, but it wasn’t my aim. I wanted this site to be about me as a writer – my books, ideas, the way I write, what I’ve learnt, my struggles and mistakes, and sometimes opinions and thoughts connected to the world of books and fiction. Occasionally I go off-piste, but I’ve concluded that the tighter I keep to my ‘brief’, the better the site works. Plus, if people decide to follow this blog, at least they’ll know what they’re getting.

The fifth lesson: Thou shalt not take the Like button in vain

… but I’ve decided not to be afraid of using it either. I never press it unless I really have read the post in question – but assuming I have, and can’t think of anything in particular to write by way of a comment, and/or just haven’t got time to – then this is just a good, quick way of expressing appreciation for the time and care the blogger has taken. Usually I really do like it as well. Occasionally I might read something I massively disagree with, and/or can’t really understand, in which case the button remains unpressed; but that’s relatively unusual. Even if I don’t completely agree with what’s been written in every detail, I normally like that it’s been written at all and so a contribution’s been made to a debate. But …

The sixth lesson: Blessed are the commenters

I’m trying to do this more, even if it’s just a quick sentence or too. Who doesn’t like comments on their posts? I certainly appreciate them – unless they’re about hairpieces – as it shows that someone’s taken a bit of extra time and trouble, and I know how busy they probably are because I am too. For that same reason however, I know that, more often than not, a visitor will only have time to press Like. And that’s OK too; but nothing beats a comment.

The seventh lesson: Don’t try to follow the whole world

I appreciate every time someone follows my blog, but I’m also not naïve. I know that motives are often mixed. Sometimes I can see why a particular person has chosen to follow – because I can see, looking at their blog and profile, that we have something in common – often because they’re a writer too. Other times, it’s less clear. And sometimes, it looks very much like they’re amassing followers because they’ve got something to sell. Now don’t get me wrong – there’s nothing wrong with trying to sell something. It would be pretty hypocritical of me to complain when the main reason I started my own blog in the first place was that I hoped more people would read my books. And when I first started getting ‘XYZ is following your blog’ messages, I thought it was only polite to reciprocate and follow their blogs, too.

Now I feel differently. There are only so many hours in the week after all. So when I get a follow, I will always visit the follower’s site. I will read something. But I won’t always follow. And if I don’t, that isn’t an implied criticism of that blog. It isn’t that I don’t think it’s any good. It’s just that I would rather make fewer, more meaningful connections, blogs that I will continue to visit and read and sometimes contribute to, rather than dozens that I will probably never visit again because I just haven’t got the time. Not all the blogs I choose to follow are by other writers (though many are). Some are just interesting, or quirky, or funny, or represent another common interest, or something else. They just aren’t every single blog I visit.

The eighth lesson: Know when to take a break

As I’ve said, there’s never enough time. And that’s the curse of blogging – it can be so darn time-consuming. I still think it’s worth it anyway, but sometimes I have to take a break. Blogging regularly is good, and I try to do that, but sometimes other things have to take priority. Like actually writing books, my family, holidays. Eating, the day job, you know. Stuff.

The ninth lesson: Blessed are the brief

If you’re going to blog regularly, it helps to keep posts brief. Just like I’m not doing now.

As with writing books and everything else, I still have much, much more to learn.

So thank you for reading this, and thank you to everyone who’s visited my blog, liked, commented and/or followed.

And here endeth the lessons.

10 thoughts on “The ten things I’ve learnt about blogging”