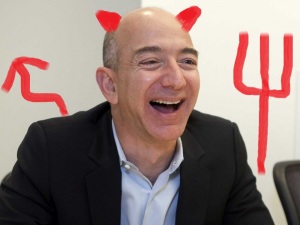 Are you pro- or anti-Amazon? Or somewhere in between? Many people seem to be jumping to condemn them, especially now they’re in a not-so-secret dispute with the big publisher Hachette. Reading some of the increasingly lurid and extreme criticisms, I’ve felt my level of bemusement rising along with the rhetoric.

So, to get it off my chest, I wrote a piece on it a few days ago. I then had second thoughts about posting it, not because I changed my mind about the contents but rather because I’m never too sure how many people actually read longer opinion pieces like this. So if you don’t want to read it all (it’s about 1,400 words), here’s a very quick précis:

That’s basically it. Do you agree or not? (And should I be saying ‘Amazon is ..’ or ‘Amazon are …’? Not quite sure.) Comments welcome.

And for those interested, here is the longer version …

Judging by the tidal-wave of criticism engulfing them during the past few weeks, since its dispute with the publisher Hachette first became public, you might easily conclude that there must be more than a whiff of sulphur lingering around the e-commerce giant. It certainly seems to have become highly fashionable to be anti-Amazon – a position that was increasingly popular even before the Hachette spat blew up, and has become exponentially so since.

Amazon have been accused of all sorts of things. A cynical monopoly, bent on using its dominant position to bully and control the whole publishing industry. (The fact that Amazon sells an awful lot of things that aren’t books doesn’t normally get much of a mention. Presumably TV manufacturers can look after themselves.) Attacking publishers, authors and readers. Even threatening the future of books, of literature itself. Tax dodgers. The mafia. Vladimir Putin. Darth Vader. I haven’t yet actually heard them being compared to the Infernal One, but I’m quite sure they must have been by someone, somewhere.

Here’s just one article summarising many of the criticisms levelled by Hachette authors, bookstore owners, and various industry spokesmen.

To be fair, I’ve also seen other opinion pieces that have attempted to restore some balance to the debate. See here, here, here and here for some examples. There are a number of reasons why I agree with much of what’s argued in these articles, and why I believe that the anti-Amazon frenzy is largely misplaced and bordering on the absurd. (Actually, more than bordering – it’s crossed the border, built a big house with a massive swimming pool, and taken up permanent residence.)

First, and most obviously, we don’t know the precise details of the dispute with Hachette. Too many people are assuming that it must be Amazon being greedy and unreasonable, because that fits in with an existing, widely-held narrative about them and their allegedly negative effect on the publishing world. But what if Hachette are trying it on? Or what if it’s simply a bit more complicated, less black-and-white than one of them being in the right and the other in the wrong? Things are rarely that straightforward in the business world.

Second, Hachette are not some weakling little indie. They’re a substantial multinational, one of the world’s leading publishers. Admittedly not as big as Amazon, but – crucially – be in no doubt they can hold their own in corporate guerrilla warfare. They know full well that the prevailing mood of the industry is solidly behind them, and that other major publishers will be secretly rooting for them. It’s not insignificant that it will soon be the turn of those other publishers to enter the ring with Amazon, and that the outcome of the Hachette negotiation and the precedent it sets will therefore be highly significant for them.

Also, the recent Apple saga demonstrated that the big publishers are not above collusion, and although there’s no suggestion that anything like that is happening right now, it’s clear that their interests are closely allied in this dispute. That might be another reason why Amazon doesn’t want to lose – they must know full well this isn’t a battle with Hachette alone. Also, Amazon are not the all-powerful mega-monopoly they are too often lazily portrayed to be. All those Hachette titles can be obtained from sundry other outlets, and already a number of those outlets have taken advantage of the situation by offering the affected books at a discount, including the new J. K. Rowling (sorry, Robert Galbraith). This is not a risk-free game for either side.

Third, much of the most strident criticism of Amazon has come from those with the most invested in the status quo, such as high-profile Hachette authors who have done very nicely from the conventional industry structures and business practices. Now those authors are entitled to defend their livelihoods of course. But never forget that this industry has given us inflated e-book prices, celebrity-penned ‘novels’, and Stephanie Meyer and an endless stream of Meyer wannabees. It is not necessarily the guardian of high literature, even if it’s very quick to claim that mantle at times like this.

Fourth, there’s a not-so-faint stench of hypocrisy clinging to much of the more strident down-with-Amazon rhetoric. Big publishers are suddenly earnest cheerleaders of the small bookshop, when until recently they’ve been too busy cozying up to the big chains to notice. Those same big chains have spent years trying to extract the best possible terms from publishers, yet now Amazon are vilified for doing the same thing. Big-name authors complain that Amazon have cut the discounts on their books – and yet the same company is criticised for forcing down the price of e-books, a move that will apparently destroy conventional publishing and the livelihoods of authors (and note how those two things are implicitly conflated). It’s not apparently such a big deal that publishers attempt to inflate e-book pricing while paying the same desultory royalty rates to authors. I know that publishing is a business, and a risky and (the rare Fifty Shades-like mega-hit aside) not outstandingly lucrative one at that. They have every right to fight their corner. But, please, spare us the woe-is-me, shining guardians of literature act. It doesn’t wash.

Fifth, it seems disingenuous at best to seek to blame Amazon for many of the changes that are sweeping the industry. To be sure they’ve driven much of this change, taking a key role in popularising e-books for one thing. But they invented neither the e-book nor the Internet. Electronic publishing was happening anyway. Of course, the major publishers would far rather have carried on controlling the whole thing themselves, rather than some upstart e-commerce company yanking the carpet out from under their feet.

I might also add here that the fear and loathing of Amazon misses the point that they won’t be dominant forever. The biggest players come and go. They always have and always will. Change was their making and change will one day be their undoing. It won’t be the defenders of the status quo, but another bright young upstart that works out the next big thing and does it quicker and/or better than Amazon.

Finally, I really think that Amazon has been a power for good in many ways. They have made a vast selection of competitively-priced books more easily available to everyone. They have made self-publishing easier than ever before (though they didn’t invent that either!) – and at royalty rates far higher than those offered by conventional publishers. (Not that you can directly compare them, as Amazon don’t of course provide all the value-add services of a conventional publisher. The whole topic of whether Amazon has been a generally good thing for writers or not is a complex one – but I think on balance they have.)

Crucially, their customer service is, in my experience, generally excellent and clearly superior to that offered by most other large (or even small) companies. When you deal with Amazon, they make it seem so easy you wonder why no-one else can get it right. Everyone plays lip service to this but very few other big corporations really take it seriously enough. This is no small thing – and I believe that it’s if and when Amazon stop excelling in this area that it could all start going wrong for them.

Note that none of the above seeks to paint Amazon as a paragon of virtue, an alloyed good thing in the world. They are a big corporation. They negotiate hard and take no prisoners. And sometimes they make mistakes. But they are exceptionally good at customer service, they have (for better or worse) enabled countless indie authors to realise their dream of getting their books ‘out there’, their website has made online shopping easier than ever before, and – best of all – they’ve managed to annoy a lot of people who probably deserved to be.

And they’re not actually evil.

10 thoughts on “Is Amazon actually evil?”