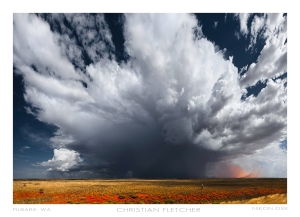 A Dramatic Way to Clear the Air is a 1,000 word story – kind of boy-meets-girl in a thunderstorm. It started life as a longer, 1,500 piece that I wrote about a year ago. Given my recent enthusiasm for shorter / flash fiction, I thought it would be an interesting exercise to try to cut it down – losing one out of every three words – while maintaining the essence of the story.

So I did, and it wasn’t as hard as I’d first imagined. I had to go through it a few times to hack away all those 500 words, but it was surprisingly satisfying – and I really think the shorter version is better. It’s tighter, more direct, has fewer adjectives, adverbs and description, and yet I don’t think it really loses anything in terms of story or the characters.

Sometimes losing word count is a case of cutting unnecessary repetition or elaboration. Often things can be implied rather than explicitly states. One example – the sentence:

She peered ostentatiously at the clock, spidery black eyebrows raised almost out of sight.

… was originally followed by:

The words “you’re late” could not have been more clearly spoken if they had been flashed in blue neon across the walls.

I kind of liked that second sentence, but I concluded that it was basically superfluous. The fact that the woman in question thinks that Pete (the central character) is late for work is clearly implied in the first sentence – it doesn’t really need to be spelt out. So that second sentence was cut completely from the final version.

If you’re interested to compare, the original, 1,500-word version is here: A Dramatic Way to Clear the Air – long version