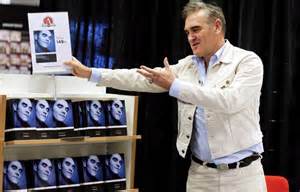 New year, same old nonsense. Today came the depressing news that yet another celeb, famous for something not remotely connected to literature, has decided that they’ve got a novel in them and, by God, we’re going to have it whether we like it or not.

(Fair warning: I’m not usually given to good old fashioned rants, but this is going to be one. I can’t help it; this has been building up for a while and I’ve got to get it out of my system.)

He’s well known in the UK, but for those unfamiliar with the legend that is Morrissey, he’s best known for being the front man of 80s band The Smiths. Since then he’s remained famous partly for his solo output but mostly due to an uncanny knack for self-promotion. He’s vitriolic, entertaining and never found short of a controversial quote. Many people are very interested in his opinions, especially him.

Seriously, I’ve got nothing against Morrissey. I don’t agree with everything he says – some of his views are crazy or worse. But he seems to be a thoughtful and intelligent person whose ability to string more than two words together was demonstrated by his best-selling autobiography last year. I haven’t read it myself, but by all accounts it was pretty good and well written. It was certainly well reviewed. All of which should in theory give him a useful advantage over the majority of celebs who decide that a novel is a pretty neat idea when they get bored of doing whatever it is that they’re actually good at.

Morrissey’s novel might even be quite good – if he works very hard at it. Which almost certainly means much harder than he yet realises. Apparently he’s ‘midway through’ writing it. But halfway through what? The first draft? If so then you’ve got an awfully long way still to go, Mozza my lad. Of course he’ll be offered plenty of editorial help by his publisher, which he’ll take if he’s wise. (I’m not totally convinced of this however – he’s kind of strong-willed to say the least.)

But that’s not the point. Because, let’s be honest, it doesn’t matter if his novel’s good does it? There’s no mention of a publishing contract at this stage, but does anyone doubt that he’ll get one? No doubt the kudos of his successful autobiography helps, but mainly to lend a fig-leaf of respectability to this latest literary prostitution. Hell, even Katie bloody Price has published ‘novels’ to her name (the poor girl doesn’t write them unaided of course; it’s just possible she hasn’t even read them).

At this point, you’re probably thinking this is little more than the bitter and twisted outpourings of an unknown writer, venting his spleen in an unedifying display of naked jealousy at the ease in which the already-famous get the publishing breaks. And to that I say: damn right.

Not for Morrissey and his ilk the perils of the slush pile. It’s not necessary for him to produce something so extraordinary that it will outshine 99.9% of the competition to catch an agent’s or editor’s eye. And then hope they get a publishing deal (not guaranteed even then), and then that their professionally-published book actually sells in any great number (because very many don’t). Nor do they have to join the torrential rush to self-publishing, to fight to get their work noticed, let alone sell, against odds no less daunting than those faced in the more traditional process. The bottom line is, Morrissey’s novel probably won’t be especially good for the simple, brutal fact that it doesn’t have to be.

I realise of course that plenty of stuff written by the non-famous doesn’t get published because it doesn’t deserve to be, because it’s not really good enough. I also concede that much of what is self-published isn’t up to much. But a lot is. There’s a great deal of talent out there; and every time a starry-eyed publisher lobs a contract at another celebrity, that already tiny crack of an opportunity for real writers narrows still further; the odds inch ever higher into the stratosphere. Even though plenty of those writers are producing wonderful work which totally embarrasses the sausage-machine output of the celeb fiction factory.

I mean, what is it with fiction? Why do so many famous people think they can write a novel worthy of publication? It doesn’t often happen the other way around. With very rare exceptions, you don’t get novelists (I mean proper ones, who got published by being actually good at writing) decide to record albums, take up professional ballet or go for an Oscar. And there’s an extremely good reason for that: they’re good at writing, not singing, dancing or acting.

I happen to think I can write. It’s one of my very few talents, and quite possibly the only one. I’m not saying I’m magnificent at it, not claiming to be the next big thing, but I can do it. Whereas my acting is bad, my singing is worse and you really don’t want to see me in a tutu.

Back to Morrissey. What makes it even worse are the reasons he’s given for trying his hand at the old writing game. It’s doesn’t seem to be because he’s got a great story to tell. Basically, it’s less to do with literary ambition and more about a great steaming Mozza-style hissy fit. Apparently the music business is hopelessly in thrall to hype, marketing and an obsession with shallow celebrity. Well fancy that. Like it hasn’t always been? And as if the publishing industry is much better when it falls over itself to publish the almost-certainly-mediocre-at-best offerings of people like him?

I know publishers have to make money and it will always come down to how many books they think they can sell. And Morrissey’s novel will probably sell. (Although celeb offerings don’t always; discount bookshops are the final destination of many an over-optimistic print run.)  There is also the argument, I suppose, that such high-profile publishing deals can help subsidise the riskier investments in genuine undiscovered talent. It’s just that I see rather more of the former than the latter, especially as mainstream publishers seem to become ever more risk-averse.

So – yes, I am bitter, I am fed up, and on behalf of all the unpublished and unsuccessfully self-published of the world I say: celebs, please stop ticking that box that says ‘I know, I’ll write a novel next! My agent thinks it’s a good idea and, I mean, how hard could it be ..?’

Of course I know they won’t stop. But I had to get that out of my system. And having done that I’ll keep writing because that’s what I do, I enjoy it; it’s part of me. If I ever achieve any kind of success it will be a bonus, and I know my own efforts and talent (along with a fair dollop of luck) will have got me there. Not singing ‘Shoot the DJ’.